After more than 11-months of construction, Toyota Australia has officially opened its largest and newest parts warehouse in Western Sydney. 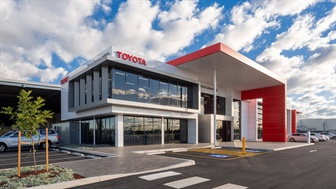 After more than 11-months of construction, Toyota Australia has officially opened its largest and newest parts warehouse in Western Sydney.

The Toyota Parts Centre NSW (TPC) is located on a 6.4 hectare site close to a network of motorways and major arterial roads at Kemps Creek, New South Wales.

It features more than 50,000m2 of total work area and class-leading safety and technology, including low rack storage systems, which will provide a safer and more efficient workplace as employees will no longer need to work at heights to reach parts.

It will also include full separation of man and machine to build in safety, as well as the first use of a fleet of autonomous intelligent vehicles (AIV) to reduce manual carrying of parts.

The TPC was officially opened at a special event attended by the Honourable Shayne Mallard, MLC; Councillor Ross Fowler OAM, Mayor of Penrith as well as senior executives from Toyota Motor Corporation in Japan and Toyota Australia.

Speaking at the event, Toyota Australia President and CEO, Matthew Callachor said the project had a goal to be the best global Toyota warehouse in safety, efficiency and sustainability.

"Our commitment, as a mobility company, is to address the environmental challenges that we face, and to contribute to an ever-better society," Mr Callachor said.

"We are already the leader in fuel-saving hybrid technology and we plan to introduce at least five new hybrid vehicles to our range by mid-2020, including the next generation RAV4 next year," he said.

As part of Toyota Australia's plans to reduce the TPC site to zero emissions by 2020, 2,200 solar panels were installed on the warehouse roof earlier this year.

The power generated so far - before the building even became operational - has prevented more than 477 tonnes of greenhouse gases from entering the atmosphere.

Other environmental features built into the site include rainwater tanks for irrigation and toilets, as well as energy efficient LED sensor lights.

For the first time outside of Japan, Toyota Australia will be trialling the use of hydrogen powered Toyota Material Handling fuel cell electric forklifts, with a long-term goal of being able to generate hydrogen on site in the future.