A double podium in Wales Rally GB has enabled Toyota to extend its lead in the World Rally Championship manufacturers' standings, with just two rounds remaining in the 2018 title race. 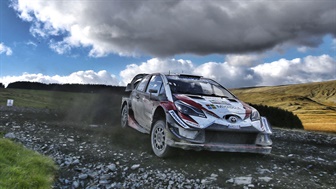 Jari-Matti Latvala on his way to a thrilling second place

A double podium in Wales Rally GB has enabled Toyota to extend its lead in the World Rally Championship manufacturers' standings, with just two rounds remaining in the 2018 title race.

Two of the Toyota Yaris WRC race cars finished in the top three, with Jari-Matti Latvala coming within just 10.6 seconds of the rally win after an absorbing scrap for supremacy against defending world champion Sébastien Ogier.

Latvala crowned his third podium finish from the past four events by grabbing the maximum five bonus points on the power stage.

His Estonian teammate Ott Tänak comfortably led the rally on Saturday until he was forced to retire due to a broken radiator.

Tänak restarted the rally on Sunday and was second to Latvala on the power stage, adding four points to his season tally.

As a result, Toyota now leads the championship by 20 points and Tänak is within 21 points of the drivers' championship lead in third place.

"It is nice to see two of our crews on the podium again, and this result means it is looking good for us in the manufacturers' championship," Mäkinen said.

"Obviously we are still disappointed by what happened to Ott on Saturday. It makes his drivers' title bid more difficult, but there are still a lot of points available and he is clearly the strongest driver right now, so it could all still turn around. I believe nothing will be decided until Australia."

The remaining rounds in this year's championship are Spain (October 25-28) and Rally Australia (November 15-18).

Toyota has a proud international motorsport history spanning more than 60 years. It became the first Japanese car manufacturer to enter international motorsport when it contested the 1957 Round Australia Trial, which is why many people consider Australia to be the birthplace of Toyota motorsport. Today, Toyota contests the FIA-sanctioned World Rally Championship, World Endurance Championship which features the famed 24 Hours of Le Mans, and the gruelling Dakar Rally. Closer to home, the Toyota 86 Racing Series seeks to develop the talent of tomorrow as Australia's premier grassroots circuit-racing category. Toyota also supports the Neal Bates Motorsport team in the Australian Rally Championship.